Did you watch Black Girls Rock! Awesome Sauce, it was empowering!

Read more about these extradordinary women and the M.A.D. girls honored by First Lady Michelle. Be sure to support this Fabulous organization! 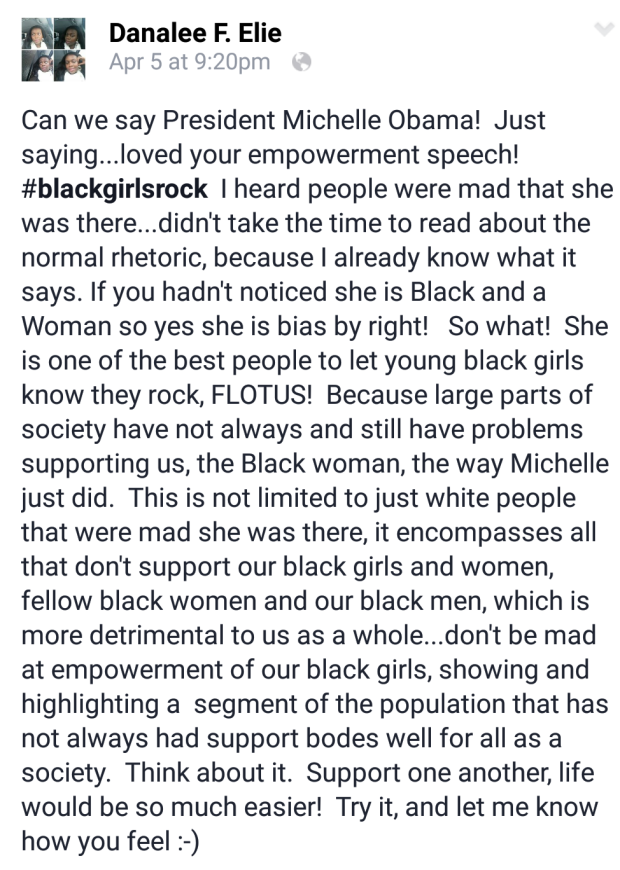 My little rant about all the chit-chat regarding Flotus attending Black Girls Rock!

Cheers to not letting anyone demean or degrade you! You are great!

I was hoping to be in the Capitol for one of the most awaited events in all history. Unfortunately, D.C. will be without one Fashionista! While watching the brief interview that John King did with President Obama on CNN today, I started to choke up. I am such a baby! But, all the emotions came back once again. Its amazing the history that will take place this weekend, especially on Tuesday. Thank God for this moment in time and thank you for allowing me to be a witness.

Here’s a brief line-up of News Coverage throughout the weekend, just in case you needed some information:

Watch the Obama Express starting Saturday morning at 10a.m on CNN. Follow Obama as he makes his journey from Philadelphia to Washington D.C., the same journey as President Lincoln.

Showbiz Tonight on CNN at The Inauguration, every night at 11p.m with A.J. Hammer.

CNN State of the Union with John King, Sunday at 9a.m. Catch the rest of his interview with President Obama.

BET will start coverage on January 20th from 11a.m. to 4p.m. Hill Harper, Rene Syler and Jeff Johnson will be your hosts for the events throughout the day. Click on link for further details.

CNN starts coverage from Capitol Hill on Tuesday at 5 a.m. Wolf Blitzer and Anderson Cooper (he is so cute 🙂 start their coverage at 10 a.m. from the roof of the Newseum. Special edition of the Situation Room from 4p.m. to 7 p.m. will recap the day’s events and Larry King to follow until 1a.m. Also, don’t forget you can also watch events on CNN.com/Live, go to link and RSVP.

Entertainment Note, Ms. Beyonce will be performing at the concert on Sunday at the Lincoln Memorial in celebration of Martin Luther King Day, along with Stevie Wonder, Garth Brooks and a host of others. She will also be singing the first song that President Obama and First Lady Michelle Obama will dance to at the Inaugural Ball. Very nice! I can’t wait to see the First Lady’s Dress!

It’s all so exciting! Ok, we’ll chat on Tuesday….